Monitoring the birth of a photoelectron

Upon publication of the results on the first real-time observation of the birth and subsequent evolution of an electronic wave packet (see Science 354 , 734-738 (2016),  DOI: 10.1126/science.aah5188) , which results from an international cooperation betwen french and spanish researchers (among them L. Argenti, A. Jimenez and F. Martín) a mention to the results has been published, among others, in the following media:

http://www.madrimasd.org/cienciaysociedad/mediateca/default.asp?videoID=2605
This news was also part of the TV program of The National Distance Education University (UNED) on February 17, 2017, at La2 (RTVE).

We offer the possibility to develop a research project on Theoretical Attosecond Electron Dynamics, oriented to obtain a PhD diploma, to theoretically investigate the coupled electron and nuclear dynamics induced by attosecond laser pulses and strong electromagnetic fields on small and mid-size molecules, as well as in solids.

The position shall be funded by the doctoral fellowship programme INPhINIT, which is devoted to attract international Early-Stage Researchers (ESR) to top Spanish research centres. INPhINIT is promoted by the “la Caixa” Foundation and relies on the European Commission’s support through the Horizon 2020 Marie Skłodowska-Curie Actions – COFUND programme.

The fellowship shall cover a 3-year doctoral employment contract with good remuneration conditions (gross salary 26.000 € per year) in comparison with the standard of living in Spain, and a top up contribution for training and networking activities. Researchers shall complement their training with a variety of transnational, intersectoral and interdisciplinary activities.
In addition, phd candidates may opt to a price amounting to 7.500 € if they got the diploma earlier than 6 months after the finalization of the contract.

For more information on the fellowship programme, please visit: www.inphinitlacaixa.org

More information on the PhD position on Theoretical Attosecond Electron Dynamics can be found here: phd-position-descrption. If selected, researchers should join the Condensed Matter Physics Center (IFIMAC) by September 2017.

In case you are interested in this fellowship position and consider you fulfil the excellence criteria and other specific call requirements (research experience, training, language and mobility requirements), please, do not doubt to submit you application here: https://www.lacaixafellowships.org/index.aspx, before February 2, 2017.

For any question on the research project or if you became selected for the face-to-face interview stage, please, do not doubt to contact beatriz.

Attosecond dynamics through a Fano resonance: Monitoring the birth of a photoelectron

A group of Spanish and French researchers has described in the journal Science the first real-time observation of the birth and subsequent evolution of an electronic wave packet.

In addition to providing the first ‘movie’ of the electron wave packet dynamics, and of the interferences that such dynamics implies, the high degree of control and high temporal resolution achieved by the study opens the door to the design of electronic wave packets in atomic and molecular systems, hence to control the electronic properties of such systems systems, which could have a direct impact on nanotechnology by allowing the design of materials with unusual electronic properties.

The advent of attosecond physics (i.e., physics at the natural time scale of electronic motion) has opened the possibility of making ‘movies’ which explicitly show the wave behavior of particles and the interference phenomena associated with it.

To measure the dynamics of the electronic wave packet (EWP) the researchers bombarded a helium atom with a train of attosecond light pulses, which induces ionization by two different paths, one direct (direct ionization) and one delayed (autoionization).

Just as a wave interferes with itself as it travels along two different paths leading to the same destination (as in the famous Young Double Slit experiment, for example), the superposition of EWP generated by direct ionization and autoionization also leads to interferences, which show up in the form of peaks with an asymmetric Fano profile.

To visualize the birth of such interference (the characteristic Fano profile), a second reference light pulse was used in time intervals of the order of 200 attoseconds.

In this way, scientists were able to determine the amplitude and phase of the wave packet produced by the attosecond pulse train, and hence reconstruct the movie showing the birth of of the EWP and the subsequent establishment of the interference.

As the figure shows, the interference between the two processes leading to helium ionization takes about 5 femtoseconds (5,000 attoseconds). 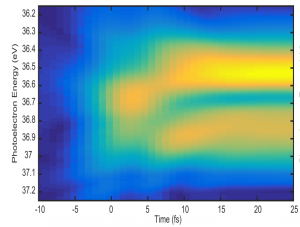 The research leading to these results has been directed by Fernando Martín Universidad Autónoma de Madrid, IMDEA Nanoscience, and IFIMAC Institute) and by Pascal Salières (Paris-Saclay University), and has received funding from the European Research Council under the European Union’s Seventh Framework Programme (FP7/2007-2013) / ERC grant agreement n° 290853 (XChem project)